The World Energy Outlook (WEO) is the flagship product of the International Energy Agency (IEA), and one of the most influential energy models worldwide; used by governments, corporations and institutions to assess the changing energy landscape and consider how the future will evolve. In its own words, “the gold standard of energy analysis”. It is a formidable effort and hugely comprehensive.

I will consider the executive summary from WEO 2017, briefly outline the IEA scenarios offered, detail the major energy trends, and question whether the IEA’s presentation of its scenarios could be improved.

In a few words: comprehensive, conservative.

WEO 2017 announced a new scenario alongside the existing New Policies Scenario (NPS), which can be considered a ‘business as usual’ (BAU) pathway where existing and announced policies are enacted (see chart below). The Sustainable Development Scenario (SDS) takes the place of the 450 Scenario which was focused on achieving 450ppm CO2 in the atmosphere, to address climate change. The SDS is focused on achieving the UN Sustainable Development goals, which include affordable and clean energy, increased renewables and energy efficiency (Goal 7); economic growth (Goal 8); industry, innovation and infrastructure (Goal 9); and climate action (Goal 13). The SDS gives an approximate temperature outcome of 1.75C of warming. The IEA states the 450 Scenario is “a key building block“ in the SDS, and highlight reducing emissions, universal energy access and reduced deaths from air pollution as central objectives. 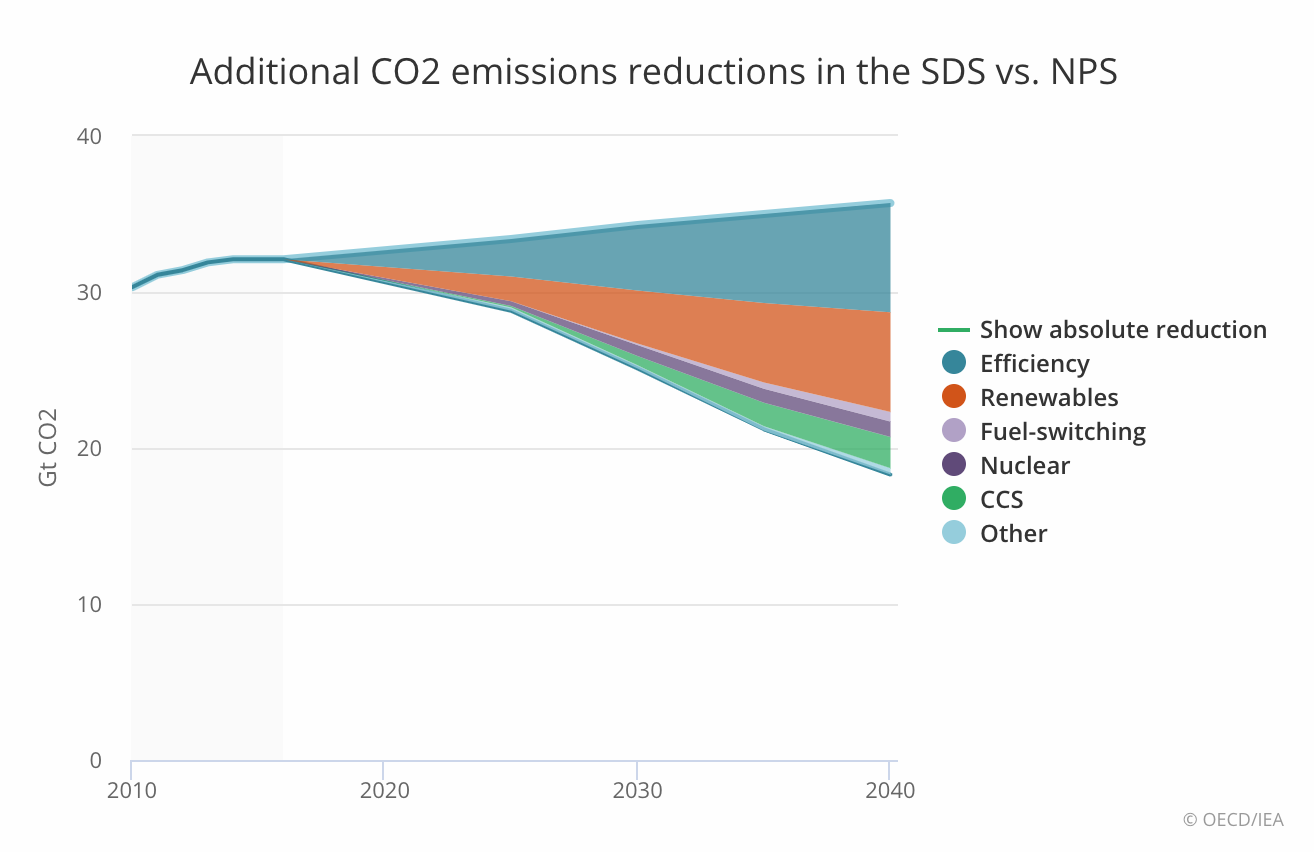 We now know that 2017 was the last year for publication of the Energy Technology Perspectives (ETP) model, which has now been shelved. This bottom-up model examined the potential growth of disruptive clean technologies if suitably enabled and provided a ‘Beyond 2 Degrees’ pathway that also offered 1.75C of warming. It seems it could not survive alongside the top-down modelling of the WEO, which is directed by the IEA’s director, Fatih Birol, formerly the IEA’s chief economist and ex-OPEC employee - a Turkish energy economist and one of the most influential people in energy.

** All of the predictions below from the WEO 2017 executive summary come from the New Policies Scenario. **

The major headlines in the summary are the continuing cost reductions in wind, solar and batteries; electrification; and increased energy demand, 30% from today to 2040. Also mentioned are China’s increasingly service oriented economy and cleaner energy mix, the resilience of shale and tight oil in the USA, and electric vehicles (EVs).

Renewables cost reductions mean they are cheapest on a new versus new basis in many parts of the world today, and capture two thirds of energy investments in power. WEO 2017 predicts 40% renewable generation globally by 2040.

The IEA see the majority of demand growth coming from India and South East Asia (SEA), and note that 2016 consumer spending on electricity has already “approached parity with their spending on oil products”, and will be 40% of the rise in final consumption of energy in 2040.

EVs and coal declines, plus cheap US shale means natural gas increases in importance, up to a quarter of global demand in the NPS, substituting coal and in some cases oil. WEO 2017 sees 80% of demand growth in developing countries, but with stiff competition from renewables.

The IEA note that while a vast amount of coal capacity has been built since the year 2000, ‘only’ 400GW will be built by 2040, with most of this already under construction. The IEA predicts the Indian power mix will be less than half coal in 2040. The carbon emissions from Chinese, Indian and SEA coal in 2040 will be substantial with those projections - the IEA’s Energy Technology Perspectives (ETP) model had Asia coal generation phasing out by 2045 to meet a 1.75C temperature goal.

Realism or abdication: modelling for failure

The IEA has been criticised for presenting a central scenario (the NPS) that would deliver serious climate impacts. I think the SDS clearly meets the aims of the Paris Climate Agreement and welcome the expansion of scope from just CO2 concentration (450 Scenario) to sustainable development. But the SDS is just a yardstick for climate action. The central issue is that governments and corporations and institutions (like the World Economic Forum, of which Fatih Birol is the Energy Advisory Board chair) take the NPS as a prediction of future conditions and plan against it.

This is disastrous given the climate impacts of the scenario, on the basis that if we plan for ‘business as usual’, it is more likely we will achieve it. The IEA might reasonably say they consider existing and announced policies - but is it really credible that policies will not further ramp up climate action over the next 20 years?

Forecasting is difficult, but when the fate of the world arguably rests on the collective belief and commitment for climate action, much more care should be taken to highlight the outcomes of the IEA’s central scenario.